David Clarke, founder of DBS, recently went trekking to Annapurna Base Camp to raise £3500 for Cancer Research UK. It’s still not too late to donate via Just Giving:
https://www.justgiving.com/fundraising/Annapurna-Base-CampWe hope you enjoy reading David’s journal…Friday May 18 May
I left home about 3pm to drive to Heathrow. Surprisingly for a Friday there was little traffic and I was at Heathrow by 6pm well in time for my 9:30pm Qatar Airways flight to Doha. I took very little luggage – just a holdall and a backpack. The backpack would carry what I needed during the day. The holdall had to be under 15kg as this would be carried every step of the trek by the porters – more later.I slept well during the flight which was probably directly attributable to the excellent Pomery Champagne. Saturday May 19Doha was crazy hot at 6am in the morning. I had a short layover and then a pleasant flight to Kathmandu.I remembered that two years ago Kathmandu was a shock to all senses but this time it felt strangely like home. Amongst the throngs outside the airport I picked out my driver who was bearing an “Ian Taylor Trekking” flag.After a short journey that seemed loosely based on a video game I arrived at the Yatri Hotel. In the foyer to greet me were Ian Taylor and his wife Laura.I knew three people from my Everest Base Camp trek: Jenny (a Kiwi) and husband Jason (Aussie) plus Shelley from Arizona. Kim and Fiona made up the rest of the small group of 6 trekkers. Kim lives above the Arctic Circle in the Northwest Territories of Canada while Fiona is a singing teacher who hails from Scotland.I also met Dawa Sherpa and his son Sonam. I remembered Dawa well from my previous trip.The group met for a briefing and then had dinner followed by an early night.Sunday May 20
After a short minibus ride we took an internal 25 minute flight to Pokhara which is a much slower paced city than Kathmandu. We strolled down to the lake and boated to a small island before continuing on for lunch at the far side of the lake. 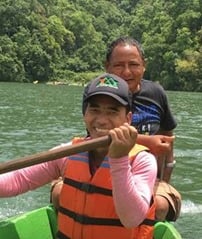 The White Pearl Hotel was luxurious and I made the most of it as I knew that the standard of accommodation would drop the further along the trek we progressed.Monday May 21
After an early breakfast a minibus picked us up to take us to the start of the trail. Roadworks and traffic really hampered us. The start of the trail dropped very quickly and was followed by a 2 hour stepped ascent of a valley side. I realised that temperature and humidity were going to play a big factor. 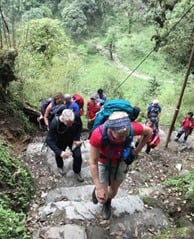 The accommodation in Urelli (1960m/6430ft) had a very basic ensuite basin, shower and a western toilet that flushed (more later).We ate well and watched the movie “Sherpa”.Tuesday May 22
It’s worth pointing out here that we were now on a trail that had no vehicular access. From this point we wouldn’t see any vehicles for 9 days. Every single item of food, every bottle of water and all building material is carried in by porters. These small framed guys (some barely over 5 feet tall) carry enormous loads using a headstrap and usually wearing nothing more on their feet than flip flops. Legends… 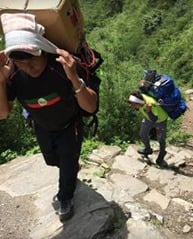 We ascended steadily from Ulleri (1960m/6430ft) through forests of oak and rhododendron to Ghorepani 2,840m/9,317ft.I was literally soaked in sweat on arrival and was grateful that the woodstove had been lit in the tea house we stopped in as it gave me a chance to string up my damp clothes in an effort to dry them out. We played cards in the evening and had a really early night at around 8pm. Ensuite toilet, basin and shower!Wednesday May 23
4:30am came very quickly as we awoke and began the one hour ascent of Poon Hill (3,210m/10,531ft) which offers one of the best viewpoints of the surrounding mountain peaks. Unfortunately this wasn’t our day. It was very misty and cloudy.The four Sherpas that accompanied us held an impromptu celebration at exactly 6:02am which was 10 years to the day that Ian Taylor (our glorious leader) had summitted Everest. Ian was very modest about his incredible achievement. 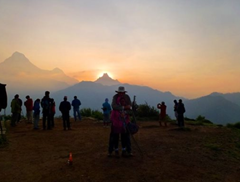 View from Poon Hill (when it’s not cloudy)We descended Poon Hill and sat down to breakfast. A steep flight of steps rose up Poon Hill directly across from the tea house with a gap of about four feet on the left between them and a stone building. A load bearing pony lost its footing descending the damp stone and fell into the gap between the steps and the building. It was well and truly wedged and obviously very distressed. Sherpa Power to the rescue! The Sherpas and porters quickly lent a hand and somehow managed to get the poor creature back on its feet while its teenage owner wept openly.After breakfast we climbed through ridges of pine and rhododendron to stay at Tadapani (2,610m/7,020ft). No ensuite but a communal western toilet that had to be flushed by pouring water into it from a plastic jug that floated in a large barrel of water.It was too hot to use my three season sleeping bag so I tucked myself in between the duvet and top sheet provided which were incredibly damp with moisture from the atmosphere. I fell to sleep very quickly but woke during the night with the strange sensation of feeling like an integral part of a sponge cake.Something made me check the clothes that I had left dry outside. The humidity was really high and my sodden clothes were not drying by hanging outside. I only had a few changes of clothes so I slept for the remainder of the night with a damp sock on each hand, my trousers spread over my upper body and my underpants on my head. Needs must and all that.Thursday May 24
The day started with a with a steep descent through rhododendron. One of the Sherpas was excited to see a tiger footprint in a pile of poo although I personally did not share his enthusiasm. 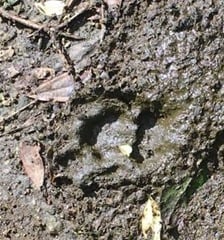 When in Nepal a steep descent means only one thing – a steep ascent. So we made our way up to Chomrung (2,140m/7,020ft) whilst watching Langur monkeys swing through the trees. Their party piece is to urinate on passers by. I was anxious not to join the party. Leeches were prevalent on this part of the trail so we constantly checked boots, ankles and legs. 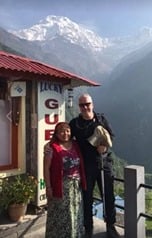 Fri May 25
Still spending most of the time in tropical forest we dropped down, climbed up and dropped down to the village of Bamboo (2,145m/7,037ft). No en suite but a flushing loo that backed on to a river. 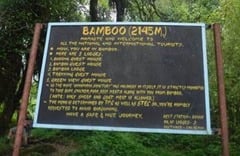 Saturday May 26
Trekked from Bamboo to Deurali, which sits at 3,230m/10,597 ft. Now we began to get a real sense of the mountainous terrain as we left tropical forest behind us. 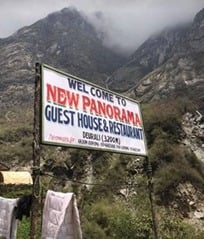 No en suite. Toilet was a hole in the ground. Deep breath, hold breath and think of Ski Sunday.Sunday May 27
After six days of solid trekking we began the ascent to Annapurna Base Camp which involved traversing precarious bamboo ladders over rushing mountain streams. The elevation at base camp was 4,131m/13,553ft. The atmosphere at this elevation contains only 14% oxygen compared with 21% at sea level. 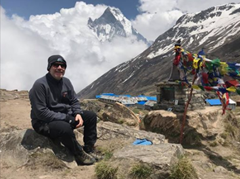 Monday May 28
We awoke to a covering of snow. Alarms had been set early to watch the sunrise. Annapurna Base Camp sits in a natural basin surrounded by 8,000m plus peaks so it is absolutely spectacular. Annapurna 1 looks very accessible from base camp but, chillingly, 30% of attempts to climb it result in death. 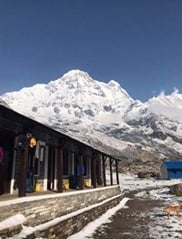 This day was a long day retracing our steps all the way past Bamboo to Sinawa. A dog we had fed accompanied us all day down the trail. This wasn’t uncommon and we always seemed to be surrounded by dogs. 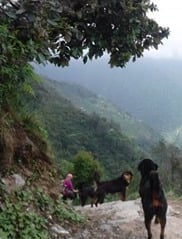 Ski Sunday before you ask.Tuesday May 29
We got the sense that we nearing the end of our trek. The Sherpa’s meditation music gave way to local music and then dance music as an impromptu disco broke out at 7am before we headed out. We clapped our four porters out of Sinawa as a thank you for their sterling efforts for carrying up to 30kg of our gear each.We had a memorable coffee stop back in Chomrung with more Sherpa and disco dancing plus the perfect cappuccino - believe it or not. 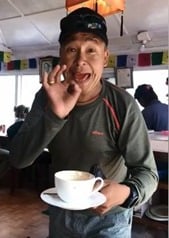 I remembered I had brought crayons and sweets for the local kids and handed them out. 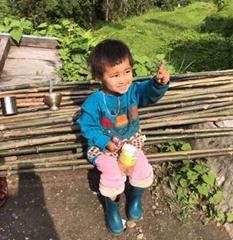 A steep descent to Jhinu Danda saw us check into a really nice hotel with full all-singing-all dancing ensuite. A hot shower felt like heaven. We had a great meal with ice cold beers followed by more Sherpa dancing and an early night at 8pm.Wednesday May 30
After a 2.5 hour trek we noticed the trail begin to widen slightly. We turned a corner and spotted the two 4WD vehicles that would take us back to Pokhara. 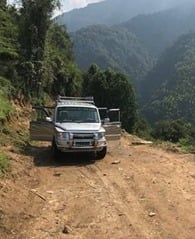 Outside a wooden shack a kettle had been placed over an open wood fire and we enjoyed one final cup of mint tea together as the 9 day trek ended. 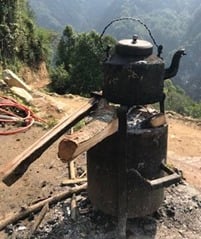 It was a bumpy and nerve wracking 2 hour drive looking over sheer drops before we hit a metalled road. From then on it was just over an hour before we were back in the comforts of the White Pearl in Pokhara.Thursday May 31
Several of us went paragliding in the morning from a huge hill overlooking Lake Pokhara. It was spectacular despite not being able to see the mountains due to cloud. Rest of the day was R&R before meeting as a group for a meal. 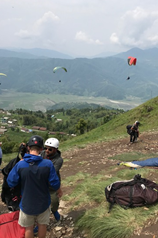 Friday June 1
Pokhara Airport was shrouded in mist as we took the short flight back to Kathmandu.I spent some time in the local market in Kathmandu. The only westerner. Completely safe.

We had yet another celebratory meal in the evening with lots of laughter but knowing that the next day we would all be going our separate ways to attempt to slot back into normality To sum up…Nepal has something about it that I find hard to put into words. It’s a world away from the UK yet I feel at home there. Nepal makes me question the way we live our lives here in the West. Nepal is the fourth poorest country on the planet yet everyone seems so happy and super content with just what they have - which ain’t much most of the time.Two major religions co-exist side by side with no apparent tensions. It’s safe to walk the streets. People are kind.It’s well worth a visit.My journal may make parts of trekking in Nepal seem like torture but it’s a small price to pay for the rewards of spending time in breath taking scenery with genuinely beautiful people.

DBS director David Clarke recently gave a guest lecture to a group of Masters students at the ...
Read More