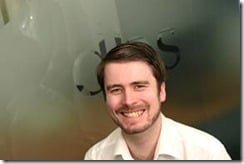 We’d like to congratulate James Hopkins who is celebrating 8 years at DBS Internet Marketing after joining us in 2011. James, who is originally from Somerset, joined us in 2011 as an Internet Marketing Assistant after studying at Lancaster University, working in the City of London as an Investor Relations Manager and later as a marketing coordinator for an independent school. James joined DBS at a pivotal time, helping to develop our social media and content marketing departs which he now heads up. Outside of work, James lives with his wife Kasia and their son Alex, who was born in 2014. James and his wife love animals and have a dog, two Siamese cats and several chickens. James’s interests outside of work include travelling, getting (rather than keeping!) fit, and good food. James also has a strong interest in current affairs and plays an active role in his local community having previously served as a local councilor. To read more about James and to connect with him on social media, please visit: http://www.dbsinternetmarketing.co.uk/our-team/4/james-hopkins/

James Hopkins is celebrating being at DBS Internet Marketing for five years, having joined the...
Read More

Congratulations to James who is celebrating his seventh year with DBS Internet Marketing after...
Read More
Book a call Call 01522 811688