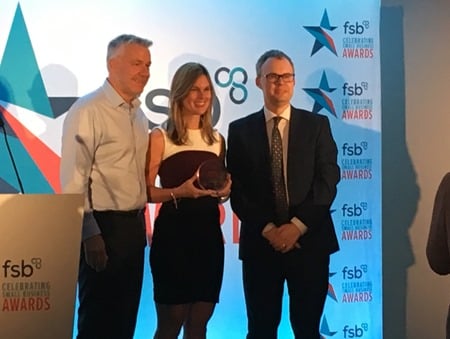 Everyone at DBS Internet Marketing is absolutely thrilled to have won the Employer of the Year Award at the FSB (Federation of Small Businesses) Celebrating Business Awards 2019.

DBS Directors Julie Priestley and David Clarke have been at the awards ceremony today (Thursday 14th March) at the Double Tree by Hilton Gateway Hotel in Nottingham, where they were very proud to collect the trophy and be named as Employer of the Year for the whole East Midlands Area. Having won the area award, DBS will now go forward to the UK national final, which will take place on 23rd May at Evolution Battersea, and is considered to be one of the highlights of the small business calendar. DBS became an Employee Owned Business in June 2017 when Director David Clarke announced that members of the DBS team would now own a part of the long established internet marketing and web design company. David’s decision made DBS Lincolnshire’s first 100% employee owned company. 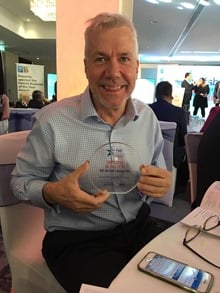 David said at the time: “For me, it makes great business sense to reward the very people that have helped to build DBS. Now that the whole team has equity, we have a vested interest to grow the company even more.”  According to the FSB website, “the FSB Celebrating Small Business Awards recognise the best small businesses and the self-employed from right across the UK, from every sector and industry and from businesses of all ages and all sizes.
The awards are the leading celebration of small businesses, shining a light on some of the best, most innovative and most determined smaller businesses.”DBS has been an Investors in People company since 2004, and has recently won a number of other awards, including the North Kesteven Community Business Award 2017, the FSB Entrepreneur Award for Innovation 2017, and the FSB East Midlands Community Business Award 2018. We are chuffed to add this accolade to these today.

National Employer of the Year Winners!